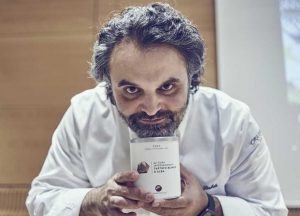 About Michelin Starred Chef Marco Stabile
Hailing from Pontedera, in Tuscany, chef Marco Stabile has quickly risen to prominence in Italy. He developed his skill for subtle invention whilst working in some of the country’s finest kitchens. Along with his restaurant Ora d’Aria, in Florence—where he is both resident head chef and co-owner—Marco is also an occasional teacher at some of the Italy’s most celebrated culinary schools. He also remains a committed supporter and collaborator with the prestigious ‘Jeunes Restaurateurs d’Europe’ group (Young Restaurateurs of Europe).

After helping his mother make pasta and traditional Tuscan recipes, Marco Stabile managed to get a job working with Guido Sabatini at Florence’s Club Bell’Arturo, where he learnt how to be organized, and then working with Gaetano Trovoto at the two Michelin-starred Alforno, where he developed his unique styles. Marco Stabile is currently the head chef and owner of the simple and elegant restaurant “Ora d’Aria” (www.oradariaristorante.com) located in Via dei Georgofili (Florence), where he was finally given the chance to best express his personality, his strong, curious, cosmopolitan and innovative spirit, nevertheless deeply rooted in a tradition which is culture, family, territory and which has the courage to reveal itself in the magic of those flavors that recall childhood but filled with an extraordinary sense of the present.

His most challenging task was to win the supports of the locals, who were incredibly proud of their Tuscan culinary traditions. But when started to eat at his restaurant, they were instantly converted. Marco’s cooking takes authentic flavours from his home region and twists them into innovative new combinations. Many of Marco’s dishes are incredibly innovative, combining new flavours, making the most of ground-breaking cooking techniques and presenting traditional food in exciting new ways. Moreover, Marco attempts to make the most of Tuscany’s natural produce. He uses local beef and Tuscan bread, takes traditional regional ingredients and present them in a bright, contemporary way. Despite his awards, Marco keeps the prices at Ora d’Aria as low as possible, so as many people as possible can taste his beautiful cuisine.

“Ora d’Aria” fulfills a great desire, the entry into the prestigious association “Jeunes Restaurateurs d’Europe (JRE), an association which helps young chefs with their careers across the continent, in 2009. Since then, there have been so many awards that the chef is able to boast that it is Marco Stabile’s curiosity and ability to see into the future and predict trends which is commended; an example is his approach to the world of beer that has given him the chance to deal with a versatile product, with many identities, investigating an innovative perspective in the kitchen. This commitment has led to the restaurant “Ora D’Aria” being rewarded for its beer menu, by the Espresso Restaurant Guide, and the for best cuisine with beer from Identity Golose. At the end of 2011 comes the highest accolade of all: the first Michelin star.

Furthermore, Giusto Manetti Battiloro, the historic Florentine company producing edible gold with flavor, “Gold Chef”, an exclusive ingredient for the most modern and refined kitchen, has chosen him for his professional qualities and for his success story. Indeed Marco Stabile brings innovation and imagination, coupled with tradition, to the table. This is the chef who makes edible gold with its flavors shine brightly.