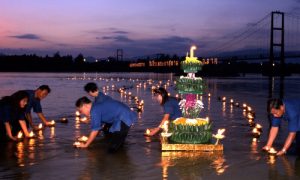 Bangkok (Thailand) – November 3, 2016 (travelindex.com) – The Royal Thai Government has announced that when the first 30 days of the mourning period for His Majesty King Bhumibol Adulyadej have passed on 14 November, 2016, restrictions on festive celebrations and entertainment venues will be lifted and television and radio broadcasts can return to normal programming.

The announcement from the Government has been made to reassure visitors with plans to visit Thailand that all events and festivals will be going ahead as planned. It is also to let locals know that, while the mourning period is being respected, other areas of life will be returning to normal to avoid disruption and to enable people to make a living.

All entertainment venues, parties, festivals and radio and television broadcasts will resume on 14 November 2016.

Thailand’s Ministry of Culture is inviting the local people and visitors to share photos and video clips to mark the passing of His Majesty King Bhumibol Adulyadej from 13 October, 2016,onwards to be included in a memorial book titled “The People’s Archives” and a documentary “Forever in Thai Hearts”.

Photos can be uploaded to Facebook at pic.culture2559 or via the Line application. Anyone submitting images needs to include the date, time and location where the picture was taken, as well as the owner’s name and contact details.

In addition, as a way of celebrating Thailand’s past and culture during this historical transition period, the Department of Fine Arts, Ministry of Culture, is inviting all visitors to visit national museums and historical parks throughout Thailand with free admission from now until 31 January.