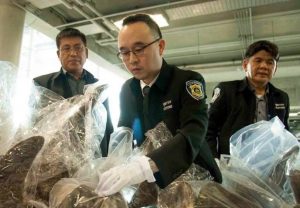 Bangkok (Thailand) – March 20, 2017 (travelindex.com) – In a major move against the corruption that facilitates wildlife trafficking, Thailand’s Attorney General Pongniwat Yutthapanborikarn announced that a senior official is being moved today to an inactive post while his potential role in last week’s US$5 million illegal rhino horn haul at Bangkok’s Suvarnabhumi International Airport is investigated. Other Thai officers may also be investigated, along with two civilian Thai women who fled the crime scene.

On March 10, Thai Customs officers stopped and inspected two suspicious suitcases at the airport and discovered they were full of rhino horn, a commodity that can be worth more than gold per kilo on the black market. Several police officers, including the senior official under investigation, a public prosecutor, and two Thai women, were accompanying the suitcases. Police officers can be seen on CCTV camera as if they are escorting the official and possibly guarding the suitcases.

Customs officers refused to let the cargo pass, despite the fact that an official accompanied the luggage, and called the police and Department of National Parks to conduct a rapid joint investigation. Customs officers started probing each of the persons accompanying the baggage. The two women fled the scene. An arrest warrant has been issued for them. Officials are also investigating the role that the police officers may have played in the case.

Freeland, a Bangkok-based counter-trafficking organization, is providing analytical support to police and Customs on this case with the support of the analytics support company, Cellebrite. “It is rare to see governments target corruption,” said Steven Galster, Director of Freeland, “but wildlife poaching and trafficking on the huge scale we are seeing, especially with rhinos, cannot happen without the help of well-placed corrupt officers. We applaud the leadership of Thai Customs, the police and Attorney General for taking this courageous and important move by investigating the possible corrupt links behind this scheme. The public should help by providing them with any information they have on these and other suspects.”

As Freeland is providing analytical support on the case, we encourage anyone with information on this or similar incidents to contact authorities, or to contact Freeland: info@freeland.org. Freeland also encourages Thai authorities to widen and deepen this investigation until it results in the dismantlement of the syndicate that is ordering the death of countless rhinos. The frontline NGO also ?hopes that once all the culprits are discovered, their ill-gotten assets are seized and converted into a wildlife protection fund that also rewards units which are successful enforcers.

This probe is likely to widen across borders, as the horn came from Africa, and the people being investigated have been frequent travelers to transit and destination countries for the illegal wildlife trade.

About Freeland
Freeland is a frontline counter-trafficking organization working for a world that is free of wildlife trafficking and human slavery. Its team of law enforcement, development and communications specialists work alongside partners in Asia, Africa and the Americas to protect the environment and vulnerable people from organized crime and corruption. For more info, visit www.freeland.org