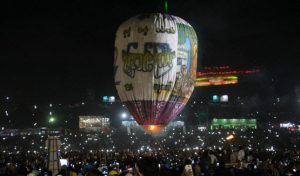 Yangon (Myanmar) – November 3, 2016 (travelindex.com) – In a remote field in the mountains in mysterious Shan State in Myanmar a yearly tradition is about to become bigger. The whole country celebrates Tazaungdaing, the Festival of Lights in the middle of November. Festivities in Taunggyi, the capital of Shan State, will be more spectacular than ever, according to the organising committee.

Huge papier-mâché hot air balloons in different shapes and sizes are launched in the afternoon from the festival grounds near Taunggyi from 8 to 15 November 2016. At around 8pm each evening it’s time for the best spectacle – when the fire balloons are launched. Once the balloon reaches a height of about 20 metres the fireworks attached to the balloons explode in all directions. It’s a fun and fascinating festival which everybody should see at least once while in Myanmar.

Myanmar Tourism Marketing confirmed that there will be special areas for foreign tourists to watch the launching of the balloons from a safe distance. Walking around the festival field is also fun, as thousands of Shan people join in for food, drinks and games.

In a country where 84% of the households have no electricity, it’s no surprise that many activities at the festival run without electricity. A man-powered Ferris wheel is one example.

The festival has been running for many decades and the Shan people are keen to keep the balloon tradition alive. When the balloons are lit up it’s a magical sight, unlike any other firework display you’re likely to see.

If you’re not in the Taunggyi area (which is near the famous tourist destination of Inle Lake) in November, it’s still a great time to travel in Myanmar. The monsoon rains are gone. Their legacy is lush greenery all over the country. It’s the time that yellow robes and many other accessories are offered to monks around the country. During the days before the festival you will see bamboo poles with donations (including banknotes folded in beautiful shapes) around towns and villages.

During the festival, hot air balloons are launched throughout the country, although at a smaller scale than Taunggyi. Most temples organise weaving competitions. It’s a good time to be in any up-country town in Myanmar.

Not being able to book your flight to Myanmar in time to visit this year? The dates for next year are already announced: 29 Oct – 3 Nov 2017.