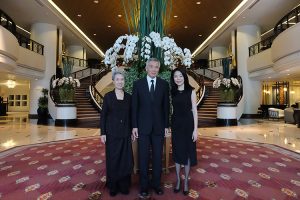 Singapore – October 24, 2016 – (travelindex.com) – Mr. Lee Hsien Loong, the prime minister of Singapore, and his wife, Mrs. Lee, were welcomed by Ms. ChooLeng Goh, a Singaporean General Manager of the Plaza Athénée Bangkok, A Royal Méridien Hotel. Mr. Lee and Mrs. Lee stay in this hotel, on the occasion of paying their respects to the memory of the late His Majesty King Bhumibol Adulyadej.   Quoted from a Facebook post, Mr Lee posted “I last met King Bhumibol in 2009, during the ASEAN Summit in Hua Hin, Thailand. He was a most gracious host and took a close interest in ASEAN programmes to promote economic growth and development.”

His Majesty King Bhumibol Adulyadej is considered the longest serving monarch. Loved and revered by his people to an extent achieved only a few monarchs in history. He is called the true “People’s King”.  The hotel is located in the original site of “Kandhavas Royal Palace” the residence of Her Royal Highness Princess Valaya Alongkorn, and aunt of the late His Majesty King Bhumipol Adulyadej,