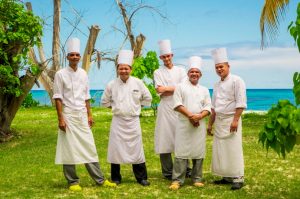 Victoria, Mahe (Seychelles) – February 19, 2018 (travelindex.com) – Tourism is getting ready for the upcoming ITB tourism trade fair in Berlin in early March. I am thankful to those who are making it possible for me to once again be in Berlin, but this time wearing a tourism consultant’s hat. Germany has overtaken other countries as a key tourism source market, making this tourism trade fair more important than ever. Germany is Seychelles’ primary source market today; CONDOR has two weekly flights directly from Frankfurt and Austrian Airline has a weekly flight out of Vienna. This will be further enhanced with the programmed arrival of Edelweiss Airline in the coming weeks.

Saint Ange Consultancy has now been approached to be the agent for some Tour Operators to monitor Standards and Operating Performance of hotels in Seychelles and, in due course, for the region. We have completed the first inspections and verified some of the claims for compensation from disgruntled visitors. The meetings set for ITB in Berlin will continue to open these partnerships opportunities.

The Seychelles Islands Foundation (SIF), custodians for Aldabra, the UNESCO World Heritage Site, has voiced its opinion on the proposed Military Base on the island of Assumption. Aldabra is proudly owed by Seychelles, and is often termed the ‘Galapagos of the Indian Ocean’. The SIF said in a communique issued this week:-

“SIF’s mandate is to protect and conserve Aldabra Atoll and the Vallée de Mai. Similarly, the Ministry of Environment, Energy and Climate Change (MEECC) has a mandate to implement the laws and policy of Seychelles. The MEECC is fully aware of the environmental issues of the outer islands. With respect to the possible development on Assumption Island, SIF has not seen the agreement; however is hopeful that with the two visits that have taken place the decision makers will take into consideration all circumstances. This includes the implementation of the Aldabra Management Plan 2016 – 2026 which was submitted to Government and approved. It is anticipated that this will be taken into account during the Environment Impact Assessment which will be undertaken as part of the implementation of the agreement”.

SIF knows that no military base was ever envisaged next door in their 2016 – 2026 Management Plan and this should by itself be a cause for concern.

As the Assumption Island Saga continues, with some interested parties set to see the project done, super powers are already flexing their muscles in the Indian Ocean Region. Last week, China, in no uncertain terms, put India on notice if it decides to move into the Maldives in its current period of turmoil. The call to leave military bases out of the region is resonating with the neighbouring Islands. Bringing super power rivalry on one’s doorstep is not a desirable prospect, despite what a few ambitious local politicians may claim.

The recent press reports republished in “Le Defi’ Newspaper of Mauritius paint a gloomy picture for Seychelles (see link below). These reports shed light on the reasoning for having a military base on Assumption, and outlines who really stands to gain from such a deal. In amongst all this uncertainty, local politicians have been heard calling for the abolition of the Seychelles Army. As a former Seychelles Judge once nostalgically quipped, “The more we change, the more it remains the same.”

Seychelles has over the years advocated that it is “friends of all and enemies of none”. When the Seychelles founding President, Sir James Mancham, echoed these words, he was working to safeguard the security of the peace-loving Seychellois people. Sadly, we are now as a Nation taking sides, and India is the chosen super power set to have its military base a mere stone’s throw away from Aldabra, the UNESCO World Heritage Site.

Today, the member States of the region are united in a pact where Navy Ships of respective countries are expected to have open port access for their navy ships in Seychelles waters. It remains to be seen how this pact will be affected with the establishment of a new port on Assumption Island.
In other news, Africa has lost three Heads of State in less than three months. Zimbabwe, South Africa and Ethiopia have all seen resignations from their highest office. Some will call them forced resignations, or a coup d’état in the case of Zimbabwe, but change is here. The African Union (AU) also changed its ‘Head’, showing clearly the wind of needed change is blowing at last.