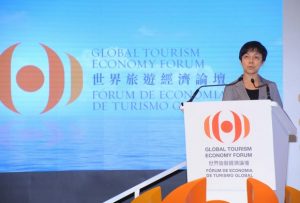 Established in 2012 and located in Macao, the southern gateway of China, GTEF takes advantage of Macao’s proximity to China, its strategic position in Asia, and its forerunner position in the region’s burgeoning tourism economy; and connects governments and industry players from Mainland China and around the world to create exciting opportunities for tourism promotion, investment and cooperation. GTEF has now successfully established itself as one of the most influential events in the tourism and related industries.

Be Part of the High-Level Tourism Dialogues, Get Connected with the Industry Leaders
-Connect with top-level tourism leaders in a platform that emphasizes results
-Examine what real opportunities underlie China’s regional integration policies
-Explore first-mover advantages in new markets
-Engage in business-matching and privately-scheduled meetings that bring new partnerships and business leads
-Experience the fast growing tourism economy of host city Macao, and delve into its rich culture and heritage

Why China? Why Macao?
The world is changing at an astonishing pace. Asia, in particular, has been at the forefront of this transformation and intense growth. One of the characterizing phenomena of the period is a proliferation of tourists driving not only domestic travel, but also global movement of people. With the increased wealth from the East, the travel industry is quickly adjusting and adapting to the new market dynamics, not only to attract visitors to destinations overseas, but also harness investment opportunities from within source markets, such as China.

With its unbeatable location at the gateway to China as well as its leadership position in Asia’s booming tourism economy, Macao is a natural choice for hosting the first Global Tourism Economy Forum.

Over the past decade, Macao has grown at a miraculous pace, with the tourism industry powering this transformation. Comprising a population of over 640,000, Macao has welcomed 30 million visitors, spending over USD 6.78 billion in the year 2016.

One major reason for Macao’s success is its unique status as China’s only destination for legalized gaming. Fuelled by China’s flourishing wealth and liberalization, Macao overtook Las Vegas in terms of total gaming revenue in 2006 to become the largest gaming economy in the world.

With the foundations of Macao’s tourism industry firmly in place, the Government of Macao SAR in 2011 launched a directive to add further impetus to the growth of the city’s travel and leisure sectors, including subsidies to local tourism-related businesses. Macao seeks to fully harness its competitive advantages to optimize and internationalize its tourism economy. Cooperation among organisations and regions is vital to improving and expanding the tourism industry across Asia for the benefit of all.

Rich in Opportunity
For international stakeholders keen to establish a presence in this part of the world, the Forum is a comprehensive window into the large China market. Delegates will also have the opportunity to gain recognition from government authorities and other global tourism trade leaders, facilitating the development of mutually rewarding relationships.