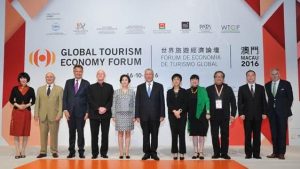 Gathering ministers and industry leaders
Themed as “The Growing Consumer Class – Rethinking and Reshaping the Future Tourism Landscape”, the fifth anniversary edition has effectively forged multilateral cooperation through its advanced international platform for tourism exchange and cooperation, gathering various ministerial officials from different countries, leaders from globally‐renowned enterprises, as well as experts and scholars to zero in on how this rising resourceful and tech-savvy group is more than ever the increasingly influential force in the tourism industry. Over 1300 delegates from many countries and cities around the world attended the Forum with fruitful harvest. The Forum also featured its first Partner Country, France, in this edition whereas its Partner City Beijing Municipality also formed a delegation to join the event. 200 media representatives came from home and abroad to cover the event.

Ms. Pansy Ho, Vice Chairman and Secretary‐General of GTEF, concluded this edition, “GTEF has embarked on a wonderful journey of making friends and allies through creating synergies and common objectives in sharing and nurturing an invaluable platform via tourism economy to continue pursuing positive and sustainable economic growth and social harmony among nations.”

Ms. Maria Helena de Senna Fernandes, Director of Macao Government Tourism Office (MGTO) and Vice Chairman of GTEF, stated in her closing remarks, “In these two days, the Forum has outlined the latest prospect for the global tourism industry and the “New Normal” in the tourism economy from a broad vision and advanced angle, inspiring key decision makers in the industry to seize the development opportunities arising from the application of technology in tourism. I believe that under our Country’s Belt and Road Initiative, smart tourism will be transformed into a new dynamic for regional cooperation across the globe. To go with the global tourism trends and promote sustainable tourism development in Macao, the Macao Government Tourism Office has incorporated “innovative technology”, “smart tourism”, “regional tourism cooperation” and other aspects into its scope of analysis in the ‘Macao Tourism Industry Development Master Plan’.”

“Tourism stands as a key driver of economic progress in the world and a pillar industry in Macao. By hosting the Global Tourism Economy Forum, we not only demonstrate Macao’s strategic position in promoting multicultural and international interchanges, but also embrace a great opportunity to raise Macao’s international profile with esteemed ministerial officials, prominent industry leaders, distinguished experts and scholars coming from different countries and regions around the world to grace the Forum. The incisive points of view shared by tourism heavyweights and professionals in the Forum, in addition to the Joint Annual Report on Asia Tourism Trends presented by the World Tourism Organization and the Global Tourism Economy Research Centre, will serve as valuable reference materials for the region and the world to make tourism and economic progress. They will also enable different governments and members of the tourism industry to map out a more inclusive and effective development plan, and with no doubt, will become great enhancers for Macao’s development into a World Centre of Tourism and Leisure.”

Forum extends its influence to community and education
This edition of the Forum not only created a platform for the global tourism industry and invited influential industry leaders, policy makers and scholars to jointly discuss how to leverage tourism development as a driver of economic progress, but also substantially contributed to the local tourism industry and provided training opportunities for local tertiary students. In particular, GTEF published the Experience Macau Travel Guide, introducing delegates to the unique cultures and tourism resources in different districts across the city, for the purpose of promoting community tourism in Macao and broadening GTEF’s positive impact to the community at large. This year, GTEF also initiated an intensive MICE hospitality training programme for the first time, offering opportunities for 20 local tertiary students to take part in the high-level international meeting and take up hospitality roles such as guest reception and exhibition ambassador during GTEF 2016. The training programme achieved great results. In light of this, GTEF will continue its training initiative to nurture the next generation of MICE professionals in Macao with a series of internship programmes to be launched in 2017 for local tertiary students dedicated to pursue a career in the field of MICE tourism.

Central and Eastern European Countries as partner countries and Guizhou as partner province in GTEF 2017
The sixth GTEF edition is scheduled to be held in Macao in 2017. The Central and Eastern European Countries (CEECs) will be GTEF 2017’s partner countries. The new partnerships in the sixth edition not only symbolize GTEF’s expansion of its European network for two consecutive years, but also set a larger number of partner countries. During the closing ceremony, Mr. Gusztáv Bienerth, Government Commissioner for Tourism of Hungary, presented the latest tourism update on the CEECs on their behalf. In addition, Mr. Li Sanqi, Director-General of Guizhou Tourism Development Commission introduced the magnificent tourism resources of Guizhou province of China. The host of the Forum is looking forward to carrying on the achievements and invaluable experience of the first five editions and incorporating more innovations into the program and format of the next Forum, promising an international platform for its collaborative partners to forge tourism cooperation across industries, sectors and regions.

The Global Tourism Economy Forum Macau 2016 was hosted by the Secretariat for Social Affairs and Culture of the Macao Special Administrative Region Government, co-organized by the China Chamber of Tourism, coordinated by the Global Tourism Economy Research Centre (GTERC) and in collaboration with the World Tourism Organization (UNWTO). The supporting entities include All-China Federation of Industry and Commerce (ACFIC), Liaison Office of the Central People’s Government in the Macao SAR, Office of the Commissioner of the Ministry of Foreign Affairs of the People’s Republic of China in the Macao SAR, China National Tourism Administration (CNTA), World Travel and Tourism Council (WTTC), Pacific Asia Travel Association (PATA), World Tourism Cities Federation (WTCF) and Macao Government Tourism Office (MGTO).

For more information about the Forum, please visit www.gte-forum.com